Near field communication technology uses something similar to an invisible bar code system. The most common type of NFC is Type 1, and it looks like a credit card with the word “NDEF” on it. This chip can store data and be written, read, and erased by NFC devices such as cell phones or smartphones. 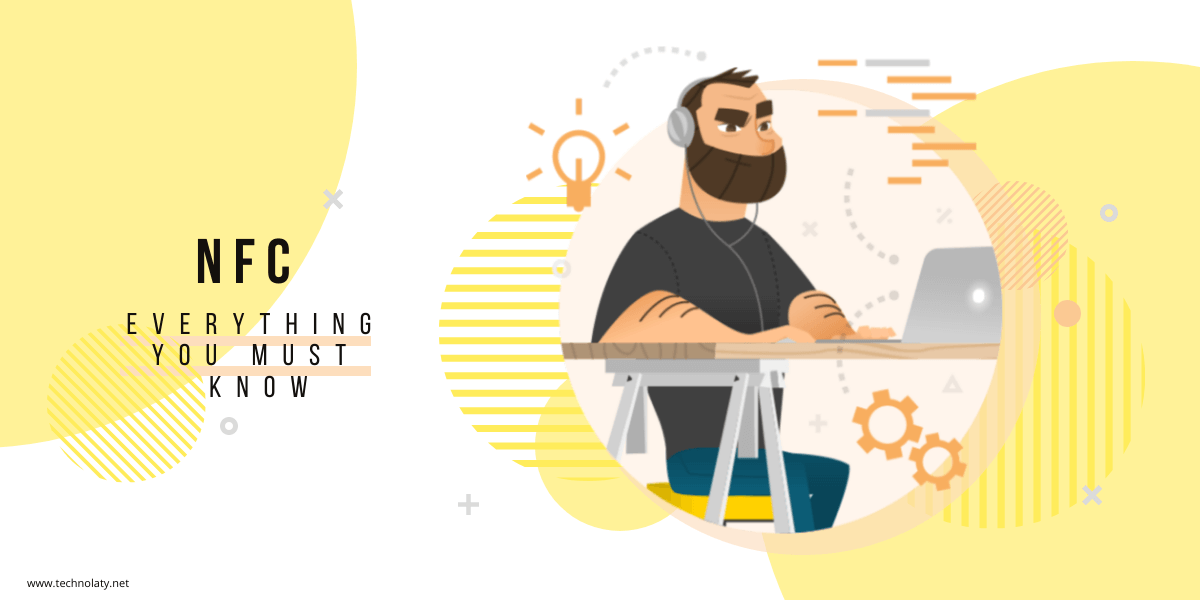 There are two types of NFC:

This technology is used widely throughout the world to connect electronic devices for remote control, personal identification, or identity authentication.

Near Field Communication (NFC) is part of the ISO/IEC 18092 standard.

How NFC communicates and works with each other?

In short, Near Field Communication uses a technology that uses two non-metallic conductive objects to transmit information from one device to another nearby device within a few inches of each other.

The key elements of NFC are:

NFC devices communicate over a range up to 10cm (2 inches) but can successfully communicate at up to 100 cm (3 feet) if the objects involved are sufficiently close and will pair with each other. This is commonly referred to as “contactless” or “long-range” communication. For the technology to function, both devices must be powered on and within range of each other.

Card emulation is a peer-to-peer wireless technology that enables NFC devices to emulate a contactless smartcard and allow payments to and ticketing. It is beneficial for mobile phones and tablets. Information can be written to it and read from it for numerous purposes, including public transport fare payments, electronic device access control, loyalty programs and various forms of financial transactions such as credit card payments or cash withdrawals at ATMs.

Peer-to-peer (P2P) communication uses NFC technology to establish connections between two devices. M-commerce apps use it on mobile devices, where the app will display the availability of nearby devices with which to connect. Similar to P2P, both devices can communicate using SMS or email. This allows for more flexible security than traditional methods of pairing NFC enabled devices.

Proximity communication uses NFC technology to establish personal connections between two users through contactless data exchange. Proximity can be used to link devices or establish a connection between individuals of interest.

Both the NFC Forum and the ISO/IEC 18092-3 standard have defined six types of protocols that can be used on NFC systems:

The first four of these protocols are provided by the hardware, while the last two are provider-defined. These protocols can be easily added to a card emulation solution to implement various user interaction points.

The first four protocols each have many variants for error correction and retransmission and various implementations that offer different messaging formats for additional functionality.

NFC can be used in combination with other technologies to create even more user-friendly systems. For example, it can be used with bar codes where a user will activate their mobile device camera to read the bar code on a product. The reader will then send this information to an application where it can be processed. The application can then use this information to produce a menu item or an order.

NFC is used in many mobile devices with Near Field Communication chips or NFC antenna to read out the near field communication chip implanted into the RFID card. Many operating systems like android, ios, windows mobile and Symbian have their apps for Near field communication. To enable NFC on your device, you can download the appropriate app to your device. You can also create your projects by using open source libraries available on the internet to read out the data from Near Field Communication enabled RFID tags.

NFC is now used as a wireless interconnection protocol between various devices. Some of those devices include cell phones, smartphones, and computers. NFC tags and smart cards are used along with the phone to use the NFC technology to make all of these devices communicate with each other wirelessly. For example, a phone with an NFC chip can be used to scan a tag that belongs to a smart card and receive useful information from it, such as boarding time for an airline or even park entrance time for a parking lot where the user paid for using their credit card.

There are many types of NFC enabled cards, which can come in both contactless and contact type varieties. Contactless cards are mainly used in situations where security is essential. Smartcards are more secure than contactless cards, but consumers more widely recognise the risks involved with using them.

Contactless cards work similarly to contactless smartcards, but there are some differences between them. Users can use contactless cards without directly going back to the bank that issued them, which makes them extremely useful in all circumstances when using a phone.

NFC is being used for several purposes. Some examples are listed below:

NFC tags are the smallest size possible to use for this technology. However, it is still capable of storing a massive amount of data. It can include almost all information about the product, including details about its production, price, stock levels, etc. As NFC technology becomes more advanced, it can store more information onto an NFC tag.

NFC tags can easily be modified by printing new labels on them, or it can be done electronically by flashing a memory device onto an NFC tag. This modification is completed by simply connecting the NFC tag to a computer or mobile device to read data.

NFC is used in mobile devices and in all kinds of household appliances that have embedded contactless chips being sold today.